Credit control is an important tool used by Reserve Bank of India, a major weapon of the monetary policy used to control the demand and supply of money (liquidity) in the economy. Central Bank administers control over the credit that the commercial banks grant. Such a method is used by RBI to bring “Economic Development with Stability”. It means that banks will not only control inflationary trends in the economy but also boost economic growth which would ultimately lead to increase in real national income stability. In view of its functions such as issuing notes and custodian of cash reserves, credit not being controlled by RBI would lead to Social and Economic instability in the country.

The broad objectives of credit control policy in India have been-

During the period of inflation Reserve Bank of India tightens its policies to restrict the money supply, whereas during deflation it allows the commercial bank to pump money in the economy.

By Quality we mean the uses to which bank credit is directed.

For example- the bank may feel that spectators or the big capitalists are getting a disproportionately large share in the total credit, causing various disturbances and inequality in the economy, while the small-scale industries, consumer goods industries and agriculture are starved of credit.

Correcting this type of discrepancy is a matter of qualitative credit control.

Qualitative method controls the manner of channelizing of cash and credit in the economy. It is a ‘selective method’ of control as it restricts credit for certain section where as expands for the other known as the ‘priority sector’ depending on the situation.

Tools used under this method are-

Under this method there is a maximum limit to loans and advances that can be made, which the commercial banks cannot exceed. RBI fixes ceiling for specific categories. Such rationing is used for situations when credit flow is to be checked, particularly for speculative activities. Minimum of “capital: total assets” (ratio between capital and total asset) can also be prescribed by Reserve Bank of India.

RBI uses media for the publicity of its views on the current market condition and its directions that will be required to be implemented by the commercial banks to control the unrest. Though this method is not very successful in developing nations due to high illiteracy existing making it difficult for people to understand such policies and its implications.

Under the banking regulation Act, the central bank has the authority to take strict action against any of the commercial banks that refuses to obey the directions given by Reserve Bank of India. There can be a restriction on advancing of loans imposed by Reserve Bank of India on such banks. e.g. – RBI had put up certain restrictions on the working of the Metropolitan co-operative banks. Also the ‘Bank of Karad’ had to come to an end in 1992.[2] 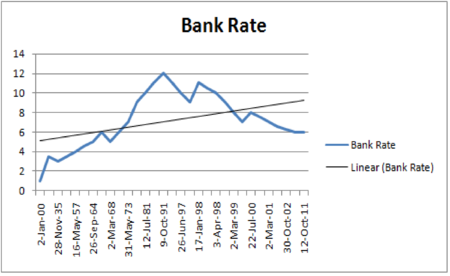 By quantitative credit control we mean the control of the total quantity of credit.

For Example- consider that the Central Bank, on the basis of its calculations, considers that Rs. 50,000 is the maximum safe limit for the expansion of credit. But the actual credit at that given point of time is Rs. 55,000(say).Thus it then becomes necessary for the central bank to bring it down to 50,000 by tightening its policies. Similarly if the actual credit is less, say 45,000, then the apex bank regulates its policies in favor of pumping credit into the economy.

Different tools used under this method are-

Bank rate also known as the discount rate is the official minimum rate at which the central bank of the country is ready to re discount approved bills of exchange or lend on approved securities.

Section 49 of the Reserve Bank of India Act 1934, defines Bank Rate as “the standard rate at which it (RBI) is prepared to buy or re-discount bills of exchange or other commercial paper eligible for purchase under this Act”.

When the commercial bank for instance, has lent or invested all its available funds and has little or no cash over and above the prescribed minimum, it may ask the central bank for funds. It may either re-discount some of its bills with the central bank or it may borrow from the central bank against the collateral of its own promissory notes.

In either case, the central bank accommodates the commercial bank and increases the latter’s cash reserves. This Rate is increased during the times of inflation when the money supply in the economy has to be controlled.

At any time there are various rates of interest ruling at the market, like the deposit rate, lending rate of commercial banks, market discount rate and so on. But, since the central bank is the leader of the money market and the lender of the last resort, all other rates are closely related to the bank rate. The changes in the bank rate are, therefore, followed by changes in all other rates as the money market.

The graph on the right hand side shows variations in the bank rate since 1935–2011.

Working of the bank rate

This section will answer how Bank Rate policy operates to control the level of prices and business activity in the country.

Changes in bank rate are introduced with a view to controlling the price levels and business activity, by changing the demand for loans. Its working is based upon the principle that changes in the bank rate results in changed interest rate in the market.

Suppose a country is facing inflationary pressure. The central bank, in such situations, will increase the bank rate thereby resulting to a hiked lending rate. This increase will discourage borrowing. It will also lead to a fall in the business activity due to following reasons.